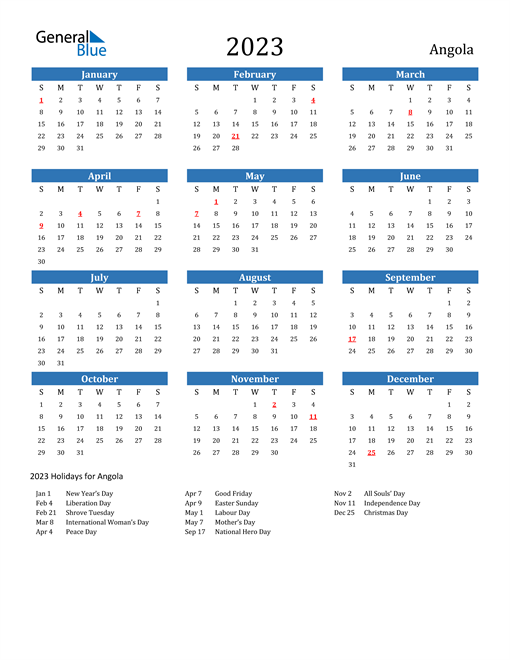 The free 2023 calendar features the list of holidays in Angola for the entire year. The 12-month single page calendar is available in Microsoft Word, Excel, or PDF format. This template shares the same easy to use features with the rest of the calendar templates by General Blue – editable, customizable, free, printable, and downloadable. 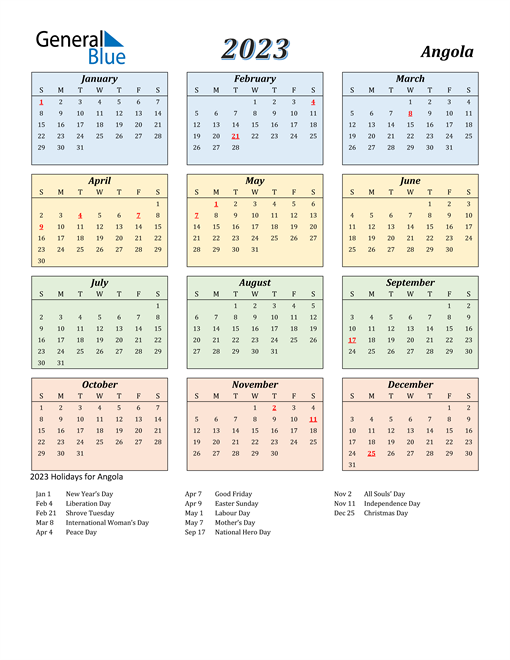 For a colorful calendar, this Angola calendar for year 2023 features a streamlined design with minimal borders and light colors highlighting the quarters of the year. The calendar is a single page which includes the list of 2023 Angola holidays. You can print the Angola 2023 calendar directly from the website using the PDF or the print button (if you don’t want to download calendar before printing). 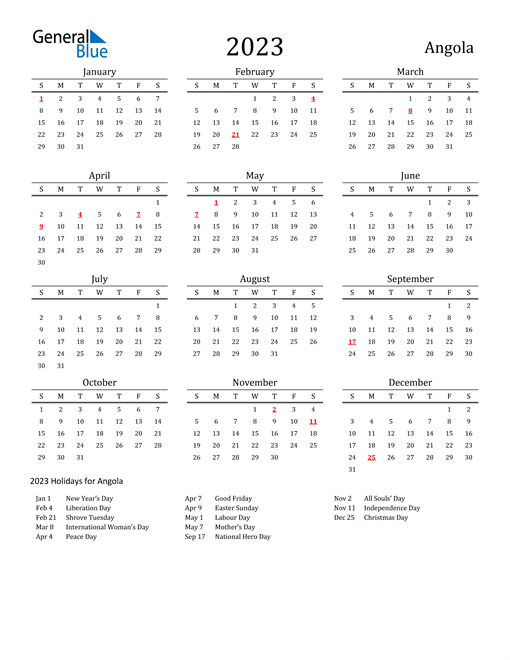 This Angola 2023 holiday calendar is available for download in PDF, Word, and Excel formats. The calendar is one page which contains the full 12 months calendar and list of holidays in Angola. This simple and classic design is one of the recommended versions for those who are looking for a printable calendar since it helps conserve toner or ink when you print. 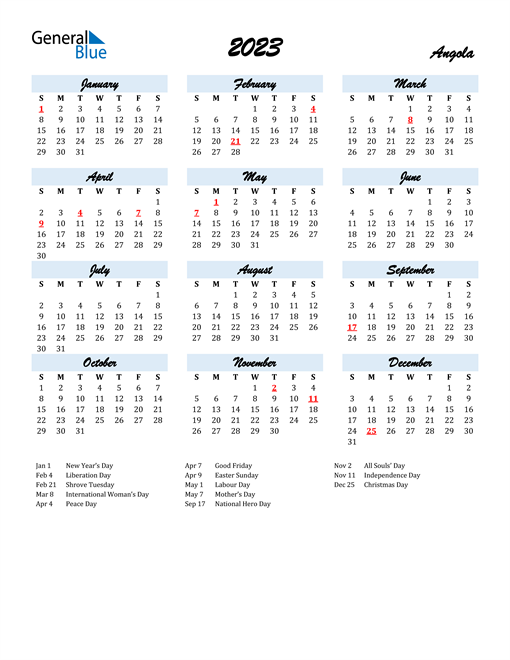 2023 Calendar for Angola with Holidays

The printable 2023 calendar for Angola shows the list of country holidays for entire year 2023. It is free to download in multiple formats (PDF, Word, and Excel). This calendar is designed with months being highlighted in a light blue color, giving it a calming effect and easier visibility of the calendar months. 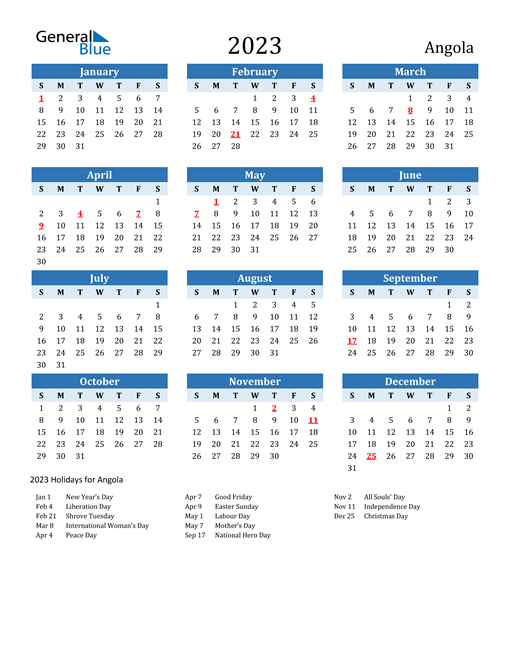 Download or print this free Angola 2023 calendar with holidays as PDF, Word document, or Excel spreadsheet. It is created in portrait layout, showing all the 12-month calendars in one page. This two-toned blue calendar highlights the months in a year and the week days, which gives it an easier visibility. 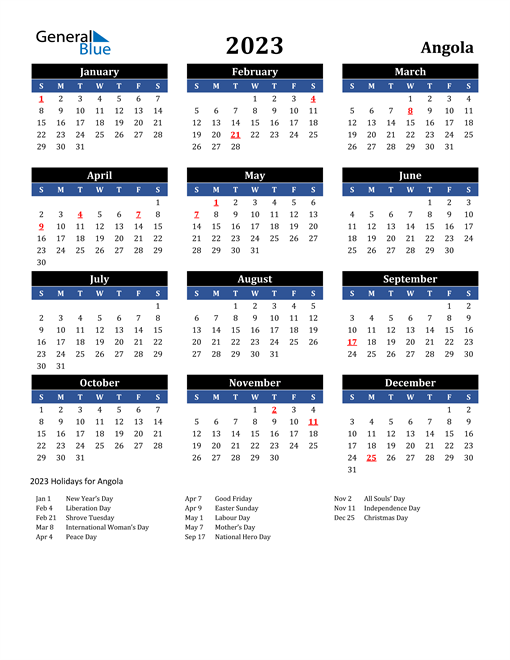 The 2023 Angola free calendar with holidays features a stylish dark blue calendar design which is great for viewing online or saving on your mobile/desktop. The Angola 2023 calendar is printable, customizable, and free to download. 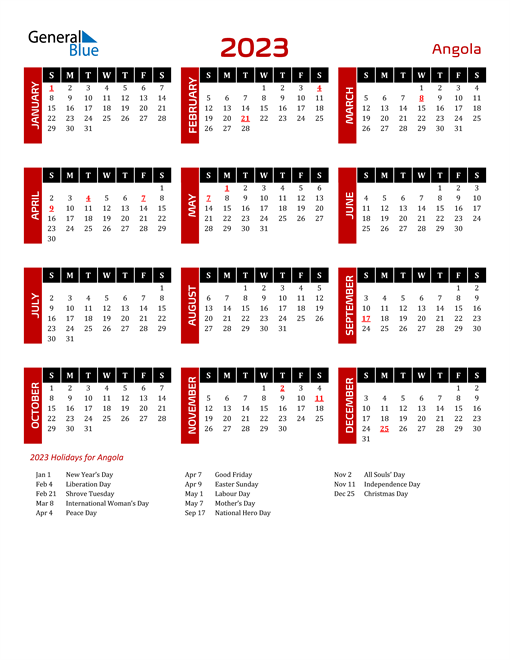 The free to download Angola 2023 calendar with holidays is a stylish one-page calendar template which utilizes black and red calendar colors. It is great for those who are looking for an online calendar to view or download in their computer.

The calendars above are some of the free downloadable and printable high-quality yearly calendars for Angola. Easy to edit calendar versions are available in Microsoft Word and Excel. The Angola 2023 Excel calendar versions are best for maintaining an online calendar, in which you can easily save the calendar to your computer. You may edit and add your schedule to the calendar and it allows you to view the Angola holidays through the year. Plan your events easily with the 2023 Angola Word calendar versions. Customize and add your events, schedules, and reminders. Once you have completed your calendar, you can easily email or print your event calendar with your co-workers and friends. The 2023 PDF calendar version is optimized for printing purposes. These PDF calendars are perfect when you need to print a one-page calendar containing the entire 12 months in a single page and the list of holidays in Angola. It is perfect for putting on the desk, boards or for personal use at the fridge. All yearly calendars for Angola in this page start on Sunday and doesn't include week numbers. If you are simply looking for an online calendar to print, a print button is provided in each calendar style so you can print a calendar directly without having to download the calendars.